It’s 2am, you’re sleeping peacefully in your bed…

Suddenly you wake up, not entirely sure why, but as you start to gain awareness of your surroundings, you become aware, to your horror, that there’s someone in the room with you.. You hear the sound of their voice, and they whisper those four words that chill every parent to the bone.

Fear of the dark usually starts to show up around the 2-year mark. As toddler’s minds mature, their memory gets longer and their imagination develops. They’ve almost certainly taken a spill on the playground or had some kind of traumatic incident by this point, so they’re aware that there are things out there that can hurt them. They’ve also probably seen a few movies or been read a few books that touch on a couple of spooky or eerie elements, even if they’re geared towards children.

As an adult, we’re experienced enough to recognise that the dark isn’t inherently dangerous (although if your toddler has a tendency to leave lego lying around, you might argue this point…). For a toddler there is no long standing history to refer to that assures them that they’re safe and secure after the lights go out.

So my first, and most important, piece of advice when you’re addressing your little one’s fear of the dark is this… Don’t fob it off.

This can be a bit of a tricky landscape to navigate. On the one hand, we absolutely want to show empathy and understanding when something frightens our kids. On the other, we don’t want to add fuel to the fire. This is why I am not a big fan of ‘monster repellent’ or closet checks.

Consider this scenario: You’re concerned, rationally or not, that there’s an intruder in your house. You mention it to your partner, who hands you a can of pepper spray and looks around the room, says, “Nope, I don’t see anyone. Anyways, I’m headed out for the night! Have a good sleep!”.

I mean, you might not file for divorce on the spot, but you’d consider it, right?

So when we tell our kids, “Nope! No monsters here! Not that I noticed, anyway, so you’re all good,” it’s not nearly as soothing as you might think. It’s easy to see how they could interpret that as, “Yeah, there’s absolutely such a thing as monsters, they’re scary as hell, and they do tend to live in kid’s closets, but I don’t see one in there at the moment, so…sleep tight”.

So that covers what I consider to be the wrong way to handle the situation. How about some advice on the right one?

As I was saying earlier, dismissing your little one’s fears as irrational or unfounded isn’t all that helpful, so ask some questions when they express a fear of the dark.

Digging into their concerns is helpful in a couple of ways.

It lets them know that you’re taking them seriously, which is very reassuring. It also helps you to assess what it is about the darkness that frightens them and helps you to address it. For example, if they tell you they’re seeing things moving around their room, it might be caused by shadows. Headlights from cars driving by can often shine enough light through curtains or blinds to throw shadows across the room. Coupled with a toddler’s imagination, that can create some seriously intimidating scenes.

A nightlight or some blackout blinds can prove to be a quick, effective solution

Tip: If you’re going to use a nightlight, make sure it’s a warm color. Blue lights may look soothing but they stimulate cortisol production, which is the last thing we want at bedtime.

Now, getting a clear, concise answer from a toddler about anything is tricky. To a toddler, “Paw Patrol” is a reasonable answer to, “What do you want for lunch?” So you’re likely going to have to work with slightly more obscure information, but we’re showing concern, and that goes a long way here.

For a lot of toddlers, bedtime is the only time of the day that they’re left alone.

They’re either playing with friends, hanging close to their parents, or supervised in some way, shape, or form by a grown-up. Bedtime is also the only time they’re exposed to darkness, so you can see how the two things together could easily cause some anxiety.

So the obvious (and super fun!) way to ease some of that apprehension is to spend some time together in the dark. 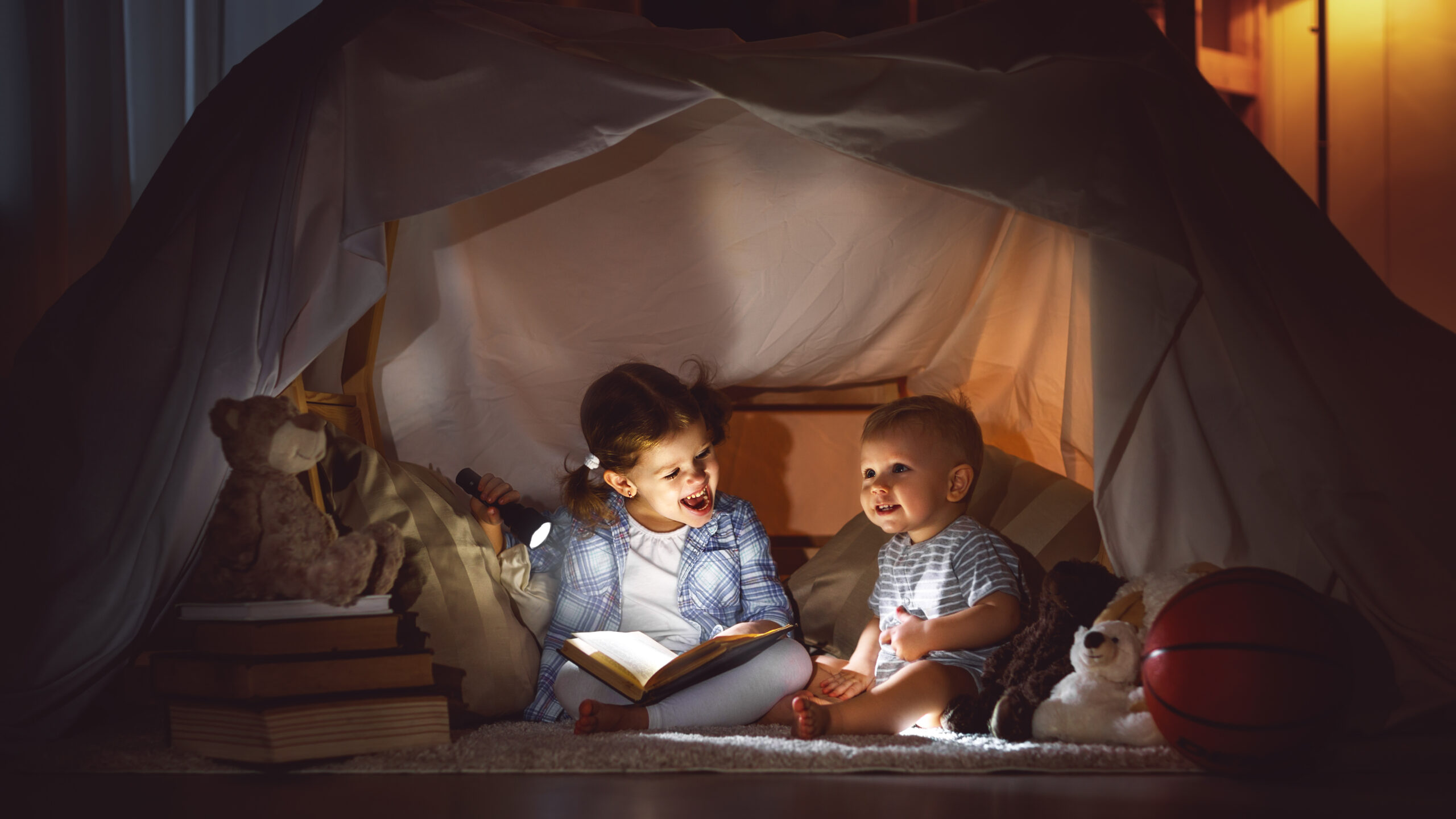 1. Reading books under a blanket with a dim flashlight is a great activity.

2. Some hide and seek with the lights out is tons of fun

Just as long as you clear any tripping hazards out of the area you’re going to be playing in. It doesn’t have to be pitch black. We just want to get some positive associations with low-light situations.

3. Shadow puppets are a great time

Even though I’m personally terrible at them!

A quick Google search will load you up with dozens of ideas, so pick two or three that you think your child will like, then let them choose one.

This isn’t likely to be an overnight fix.

After your little one’s fear of the dark has been addressed and they’ve learned that the darkness is more fun than frightening, you’ll start seeing more consolidated sleep and less visits in the middle of the night.

One last little tip, turning down the lights gradually as your little one’s bedtime approaches is a good way to ease them into a dark setting, and also helps to stimulate melatonin production, which will help them get to sleep easier.